I got a great response for my last blog post on my favourite Korean Dramas (KDrama) last time so I am back here again today with a list of my recently watched KDramas and what I think of them.

This drama is nothing less than amazing. It’s very inspiring. I don’t know how else to describe it. Just. Watch. It. I must warn you though, this is not the lovey dovey kind of drama nor does it make you laugh every few minutes. But it’s definitely a must-watch! Can’t believe I didn’t watch it sooner (though I definitely do prefer my romantic comedies!).

After a rather “neutural” and “inspiring” drama, this is definitely a very depressing, wrong-in-every-way kind of drama. As I mentioned before, I started watching this because of the cast. So many people I know from variety shows (Family Outing Season 1’s Park Si Yeon and Running Man’s Song Jong Ki & Lee Kwang Soo). This was definitely more depressing than I thought though! Oh and it’s got a rather “Inception” ending if you know what I’m talking about – I still don’t know exactly what happened. But still glad I watched it – some really sweet moments there.

So Innocent Man got too depressing for me so I decided to find something light and fun and romantic (a.k.a. my RomCom hunt begins). I found this mini series along the lines of finding new stuff to watch. The story is cliche and the acting is not the best but nonetheless it did its job – entertained and cheered me up after Innocent Man.

Another just-for-fun kind of drama, but this time, with a touch of fantasy – the legend of the nine tailed fox that is apparently very popular than I thought. The story follows a family of “Gumiho” (nine-tailed fox) trying to get their 1000 livers from 1000 men in order for them to become human again. One of them though refused to take livers from men who didn’t have love and compassion for her – this drama follows her journey in getting her one thousandth man.

More fun & games. With (again) the legend of the nine tailed fox intertwined in it. Another series with not-so-great acting and over-reacted parts though I enjoyed this nonetheless. I must admit I didn’t really expect the ending. I heard though this drama didn’t get good enough ratings to keep going so they ended it short at episode 10. 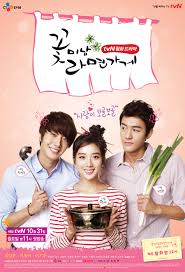 This drama was hilarious and fun to watch. The acting was definitely way better in comparison to Ma Boy and Nail Shop Paris and I promise you no “Gumiho” was involved this time. This drama kind of reminds me of the Taiwanese drama Devil Beside You though the lead actress plays a student teacher and the lead male plays the son of the owner of the school. Comedy and romance in a drama? You know I’m a sucker for it.

That was everything I watched in the past 2 months or so. I tend to get very “obsessed” when I watch dramas. I always want to know what happens next and rarely do I ever stop watching series before I finish all the episodes – especially if it’s romantic comedies.

Have you watched any series lately? Let me know in the comments below!